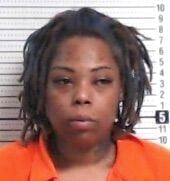 CONYERS — Lakeya Shumate, a 27-year-old woman who lives in DeKalb County but works in Rockdale County, has been taken into custody by the Rockdale County Sheriff’s Office and is facing multiple charges including felony vehicular homicide in the hit and run death of a 10-year-old boy on March 22. Shumate was stopped the next day as she passed by the scene in a vehicle matching the description of the car that hit the boy.

In a news conference on March 24, Sheriff Eric Levett said that the youngster and a 12-year-old friend had ridden their bicycles to a convenience store on the corner of Ga. Highway 138 and Ebenezer Road, and were riding westbound on Ebenezer back to their homes in the Sugar Hill neighborhood when the 10-year-old was struck from behind by a vehicle that then left the scene.

A passerby called 911 at 8:29 p.m., and Levett said the first deputy arrived a minute later, found the victim on the side the road and immediately called for EMS. The boy was pronounced dead at the scene.

While deputies were investigating, Levett said they received a call from the 12-year-old.

“He gave us a description of the vehicle, saying it was just like his grandfather’s vehicle,” Levett said. “His grandfather drove a Toyota Camry, so we determined that to be the make and model of the suspect’s vehicle, and it was later determined to be silver in color.”

Investigators began reviewing video footage from Flock Safety cameras installed in the area and throughout the county and were able to locate two vehicles matching the description and get the vehicle tags and registration information.

Shumate has been charged felony vehicular homicide, duty to stop at accident, failure to report an accident, cruelty to children 2nd degree, and no insurance.

“We know that it is a tragedy to strike anyone, especially a child. But to leave the scene of an accident when you strike someone is just not acceptable in my mind, in my heart, or even in my county, or any county.”

While the parents have requested that their child’s name not be released, his grandfather, Bruce W. McNair, spoke at the news conference and said his daughter and her family had just moved into the area about a month ago.

“Everyone who met him liked him,” McNair said of his grandson. “They had just been in that community maybe 30 days, and he had been going to school a couple of days a week and then doing virtual school. He had just started riding the bus. To give an indication of his personality, the bus driver came to my daughter’s house. He had only been on that bus for a couple of days, and she wanted to give her condolences to the family. In the position that she was in, she told us that he was a good student.

“All of the residents of the Sugar Hill community totally support us,” McNair said. “I would also like to say that a lot of children in that community shop at that particular store. It needs more lighting, and more sidewalk area for the people who may not have a vehicle to access the place of business.”

McNair went on to thank Sheriff Levett and his department for their prompt work in making an arrest.

“On our arrival at the scene, Sheriff Levett personally told us that this crime would not go unsolved,” McNair said. “Yesterday, the investigators personally came to my daughter’s home and told us they had a suspect and vehicle in custody. They were all thoroughly professional, everyone that is involved in the investigation was totally professional, and we thank them for their service.”

Dr. Norris Little, chief medical officer for Piedmont Newton, received the Light of the Community Award. Norris was honored for his efforts throughout the past year to educate and inform the community about the COVID-19 pandemic.

Bridgestone Golf has marked 30 years of operation in Newton County. Bridgestone was one of four recipients of the Deal of the Year Award.

Fibervisions has been in operation in Newton County for 53 years and completed a $45 million expansion in 2020. The company was among four recognized by the Chamber with the Deal of the Year Award.

General Mills, which completed a major expansion in 2020, is among four companies recognized with the Deal of the Year Award.

Beaver Manufacturing in Mansfield has operated in Newton County for 50 years. The company was recognized as one of four Deal of the Year award recipients for 2020.

The Dick James Small Business of the Year Award went to United Bank.

COVINGTON — Longtime Newton County resident and businessman Wendell Crowe was named the recipient of the community’s most prestigious award Thursday.

The R.O. Arnold Award, traditionally presented during the Annual Meeting of the Covington Newton County Chamber of Commerce, was given to Crowe during a surprise presentation that was videoed and included as part of a livestreamed virtual Chamber meeting.

In presenting the award, life-long friend and 2019 Arnold Award honoree Denny Dobbs said Crowe exemplifies the type of person that Arnold envisioned as a recipient of the award.

“When Mr. Bob Arnold first started talking about having an award like this for a business person, his conversation was teachers got awards, doctors got awards and athletes got awards, but business people that supported the community and provided jobs didn’t get an award,” said Dobbs. “He wanted to make sure there was an opportunity for business people in Newton County to get recognized for their contributions to the community, and I think the spirit of the original idea behind Mr. Bob Arnold’s award is right here.”

“I know there’s a world of folks and a world of organizations that he’s helped that we will never know about because he never wanted the spotlight,” said Dobbs.

Other awards presented during the Chamber’s virtual annual meeting are:

♦ The Light of the Community Award, presented to Dr. Norris Little, M.D, chief medical officer for Piedmont Newton Hospital. In presenting the award, Chamber President Debbie Harper said Norris has served the community for more than 30 years, but in the past year had become a vital resource for the community.

“Throughout the pandemic, Dr. Little has served as a source of truth, a voice of assurance and a trusted advisor on how best to protect ourselves and the ones we love,” she said.

♦ The Dick James Small Business of the Year Award, presented to United Bank. Harper said United Bank has been in Newton County for 10 years and is involved with more than 20 local civic organizations and community events.

♦ . The Spirit of Excellence Award, which recognizes the top Chamber ambassador, was presented to Tammy Bailey of Express Employment Professionals. Harper described Bailey as a “true go-getter.”

The Deal of the Year Award, which is typically presented to one business, ♦ went this year to four legacy industries that Harper described as being a foundation for Newton County’s industrial base. The four companies all observed significant milestones in 2020.

Beaver Manufacturing in Mansfield observed its 50th anniversary in 2020. The company was founded in 1971 by the Needham family to produce chemically treated yarns for the hose industry. The company has expanded over the years and today offers more types of industrial fibers than any other single supplier.

Bridgestone Golf marked 30 years in the community and has produced more than 1 billion golf balls in Covington during that time. Bridgestone also saw record sales and profits in 2020.

Fibervisions, which started operations in Covington in 1966 as carpet-manufacturer Hercules, completed a $45 million expansion in 2020.

General Mills observed its 30th anniversary in Newton County in 2020 and completed a $50 million expansion of its Cinnamon Toast Crunch manufacturing line. The Covington facility is one of the most diverse in the General Mills network, producing several varieties of cereals and snack products.

Sakura, the pink dragon mascot of the Conyers Cherry Blossom Festival, enjoys some Yoshino cherry tree blossoms at the Georgia International Horse Park entrance. Sakura will be on hand for the festival this weekend, March 27 and 28.

CONYERS — Sakura, the mascot of the Conyers Cherry Blossom Festival, is ready to welcome festival-goers to the Georgia International Horse Park this weekend, March 27 and 28.

Sakura, who is new to the festival line-up this year, was named through a three-week “Name Our Dragon” contest. Sakura is the Japanese word for cherry blossoms – a flower that symbolizes the spring season, the beauty of nature, and the ephemeral way of life. According to festival organizers, it is the perfect choice that coincides with Japan’s culture and the principles of the Cherry Blossom Festival.

The festival will be following COVID-19 guidelines to provide a safe environment for attendees. Precautions include: increased cleaning frequency with special attention to high-touch areas, hand sanitizing stations placed throughout the event area, additional space between exhibitor booths and attractions, and regular cleaning of public restrooms. Festival staff encourages guests to wear masks within the festival area. More information on festival safety precautions can be found at conyerscherryblossomfest.com.

Festival hours are 10 a.m. to 5 p.m. on March 27 and 28. The festival is located at the Georgia International Horse Park, 1996 Centennial Olympic Parkway, Conyers. Admission is free with $8 daily parking. The festival accepts credit or debit cards only for parking fees. To reduce person-to-person contact, cash will not be accepted for parking fees. This applies to parking fees only. Vendors participating in the festival may choose to accept credit cards, debit cards or cash at their booth locations. For more information about the Conyers Cherry Blossom Festival, visit www.conyerscherryblossomfest.com or call 770-860-4190.

The suspect vehicle used in a drive-by shooting on Spring Lake Terrace is described as being light-colored and possibly a 2006-2007 Honda Accord.

COVINGTON — The Newton County Sheriff’s Office has issued a BOLO (Be On the Look Out) for a vehicle used in a drive-by shooting on Spring Lake Terrace on MarCH 22.

According to Sheriff’s Office Communications Officer Caitlin Jett, “A 21-year-old male sustained injuries and was transported to a local hospital.”

The suspect vehicle is light-colored and possibly a 2006-2007 Honda Accord.

Spring Lake Terrace is located in the Springs of Ellington subdivision off Spring Road to the north and Brown Bridge Road to the south.

Office, Investigator French at cfrench@newtonsheriffga.org, or by phone at 678-625-1429.

Callers can also be eligible for a $2,000 reward, and remain anonymous, by calling 404-577-8477 and providing information that leads to an arrest.