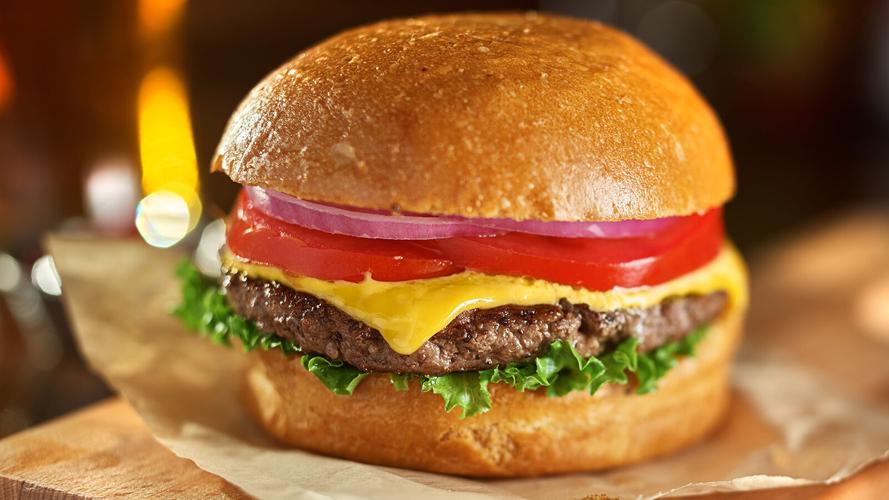 How the hamburger became an American staple -- and where to get classic burgers today. The hamburger is a quintessential dish in America. 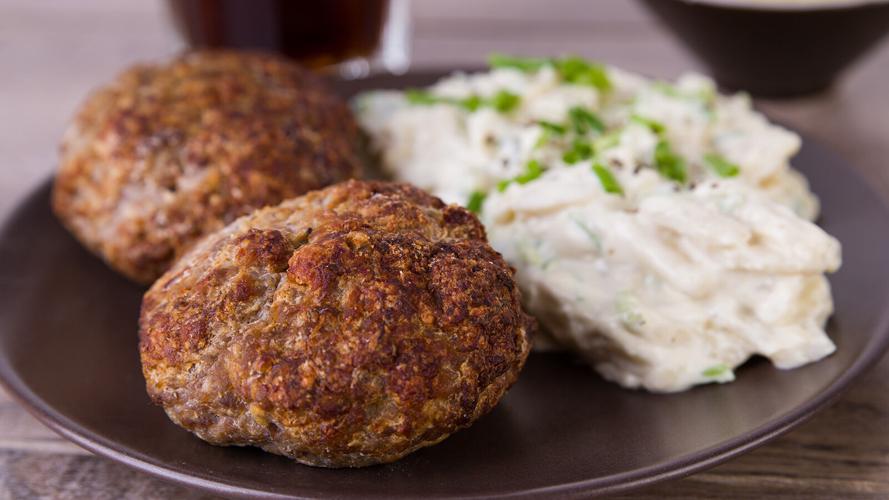 Frikadellen, the forerunner to hamburgers, served with potato salad.

Louis' Lunch, located in New Haven, Connecticut, has been serving hamburgers since 1895.

How the hamburger became an American staple -- and where to get classic burgers today. The hamburger is a quintessential dish in America.

Frikadellen, the forerunner to hamburgers, served with potato salad.

Louis' Lunch, located in New Haven, Connecticut, has been serving hamburgers since 1895.

Whether you're in the heartland of the United States or halfway across the world, when you crave an American meal, you're probably sinking your teeth into a hamburger.

While most Americans can't remember a time without them, hamburgers only started to become widely popular in the United States roughly a century ago.

Few burger restaurants from that era continue to serve burgers made with meat ground fresh daily. Fewer still also serve those burgers the way they were made back in the day.

George Motz, a burger scholar of sorts, has dedicated more than 20 years of his life to traveling across the United States researching hamburgers. After producing, shooting, editing and directing his 2004 documentary film "Hamburger America," Motz went on to publish a state-by-state burger guide, and later his first cookbook, "The Great American Burger Book," in 2016.

Most recently, he hosts Burger Scholar Sessions on Complex Media's "First We Feast," which is in its fourth season on YouTube.

"I like to say I've eaten more hamburgers in more places than you have," Motz said.

We'd have to agree: Motz estimates he's probably eaten some 20,000 burgers in his life, with no plans to stop anytime soon.

During his travels, Motz has found burger joints that continue to sling their burgers like they did over a century ago.

While such establishments remain few in contrast to their countless fast food chain counterparts, they hold a key to America's hamburger history.

Motz has shared five of the classics with CNN Travel. But first, a bit of hamburger history.

How the hamburger became an American classic

The hamburger has a well-traveled history.

According to Motz, the hamburger's origin story starts in 13th-century Mongolia when Mongols and Tatars were fighting.

"Apparently, the Tatars had a taste for raw mutton. They would ride all day long with raw mutton under their saddles. When they finally set up camp, they would take this raw, warm mutton, chop it up, probably add some spices or something, and eat it that way."

The dish eventually made its way to ship workers and ports lining the Baltic Sea, which allowed it to reach more westward parts of Europe including Scandinavia.

From there, it finally made its way to Germany and the port of Hamburg. When it made it to Germany, many centuries later, the dish shifted from raw mutton to chopped cooked beef, which is known today as frikadellen.

Motz explained that as German migrants waited for their ships, they ate frikadellen as a cheap and tasty meal option. When they left Hamburg for the US in the mid-19th century, migrants brought knowledge of the dish with them.

"Frikadellen eventually made its way to the United States, and I can imagine the frikadellen meant nothing to most people who were living in the US unless you were German. So they had to change the name at that point to 'steak in the style of Hamburg,' or simply, Hamburg steak."

Farmers from all walks of life would attend these fairs to learn about different agricultural practices and equipment. According to Motz, German migrants set up their own stands serving Hamburg steak, which was considered an ethnic food at the time.

No one can say for sure who did it first.

"There were about 7 to 9 claims all throughout the Midwest, Texas to Ohio to Wisconsin, too many claims. Unfortunately, there's no way to definitively prove who first put Hamburg steak onto a bun," Motz said. "It happened everywhere at the same time, and nobody was reporting on it."

Carrying on an American classic

The trend caught on, and restaurants starting serving the sandwiches. Hamburgers are now a point of pride in American cuisine, Motz said.

"The hamburger is pretty much the only food invention in America in the last 100 years or so. It started out as ethnic food from Germany, but we adopted it and made it different by putting it on bread."

Having withstood the tests of time, from the Great Depression to Covid-19 and everything in between, some early burger restaurants remain standing today.

Whether you're doing a road trip or a hamburger pilgrimage, here are five burger joints still serving fresh, original American hamburgers to visit in the United States:

Now in its fourth generation of ownership, this family-owned restaurant has been serving customers since 1895.

Held in a grill basket, the burgers are slid into the stoves and cooked by flames on both sides.

Choosing your hamburger isn't complicated either. "The Original Burger" is your only option, served on white bread. To enhance the meat flavor, the only garnishes you can add are onions, cheese and a slice of tomato. If you're hoping for ketchup, you'll need to go elsewhere!

Located in Hackensack, New Jersey, White Manna has garnered local and national acclaim. White Manna was founded in 1939 at the New York World's Fair and later moved to Hackensack in 1946, according to its website.

With cheese and onion topping options, you can't go wrong with this must-try burger destination.

Founded originally in Dearborn, Michigan, before relocating to its current home in Indiana, Powers Hamburgers has been serving the city of Fort Wayne since 1940.

Onions are a must have with all sliders, whether you're biting into a regular hamburger or a double cheeseburger. Don't expect any garden-variety toppings such as lettuce or tomato, and it's up to you whether to add ketchup, mayo or hot sauce after the burger is served.

Mike Hall, owner and cook at Powers, estimates around 1,300 to 1,500 burgers come off the grill each day.

"There's no real place like Powers. We serve a unique burger in a unique building, and it's a place where people come to relive their memories. It's truly a blessing to be involved with it for all these years."

The Cozy Inn celebrated a century of serving customers in Salina, Kansas, in March. Being among a select few burger joints, let alone businesses, with such an accolade, the Cozy Inn knows a thing or two about making delicious hamburgers.

"There's a lot of love involved in making these things," Steve Howard, the owner, said. "It's simple; lean meat, salt and pepper, fresh onions, and then we give you the choice of ketchup, mustard and pickle. We've been doing it this way for 100 years."

Smoky River Meats, a local butcher shop, provides the restaurant's fresh meat ground daily. Opened in 1922, the Cozy Inn claims to be among the few remaining six-stool diners in America.

Well before food trucks were a thing, the Hamburger Wagon wheeled its way onto the Miamisburg, Ohio, scene in 1913.

The Hamburger Wagon was initially created to provide food for refugees of the Great Flood in Miamisburg, according to its website. Once floodwaters receded, residents asked for more Hamburger Wagon sliders, and it has been one of the city's mainstay eating experiences ever since.

Employees have been hauling this mobile restaurant for well over a century. Like many of the longest-serving burger joints in the country, Hamburger Wagon's menu is no-nonsense; either a single or double, served with pickle, onion, salt and pepper.

"No stinkin' cheese or sloppy sauces!" is slapped right at the center of the menu. If you're planning to make your way to the Hamburger Wagon, make sure to bring cash.

Like many things after their inception, the hamburger was commoditized, from the form of the patties and buns to the practice of freezing patties.

So whether they know it or not, burger restaurants like those listed above play an active role in preserving the original American hamburger.

"The hamburger is a very important part of working-class roots in America," Motz told CNN. "Hamburgers fed every factory worker during the Industrial Age."

To anyone who may be skeptical of the well-worn looks of the restaurants or how they cook their hamburgers, Motz points out that many of these places have been open for over a century for a reason.

"Some of these places look greasy, some of them look old, some may look tired, but they really need to be appreciated for what they are, which is the original American hamburger."

10 editorial and topical cartoons from the past week — May 22

The views and opinions depicted here are those of the artists and do not necessarily reflect the views of this publication. Click for more.

POLL: May in National Hamburger Month. What is your favorite burger topping?

What to Watch Before You See ‘Obi-Wan Kenobi’

ASK AMY: Mom of trans teen is worried about church

HEALTH: When it comes to starting a statin, it's not all in the numbers

POLL: May is National Egg Month. How do you like your eggs prepared?

Bam Adebayo shines as Heat hold off Celtics in Game 3

Bam Adebayo shines as Heat hold off Celtics in Game 3

© Copyright 2022 Rockdale Citizen & Newton Citizen, 920 Green Street SW, Suite A1 Conyers, GA | Terms of Use | Privacy Policy | Do Not Sell My Info
Powered by BLOX Content Management System from TownNews.com.
You don't have any notifications.

Check your email for details.

Submitting this form below will send a message to your email with a link to change your password.

An email message containing instructions on how to reset your password has been sent to the e-mail address listed on your account.

Your purchase was successful, and you are now logged in.