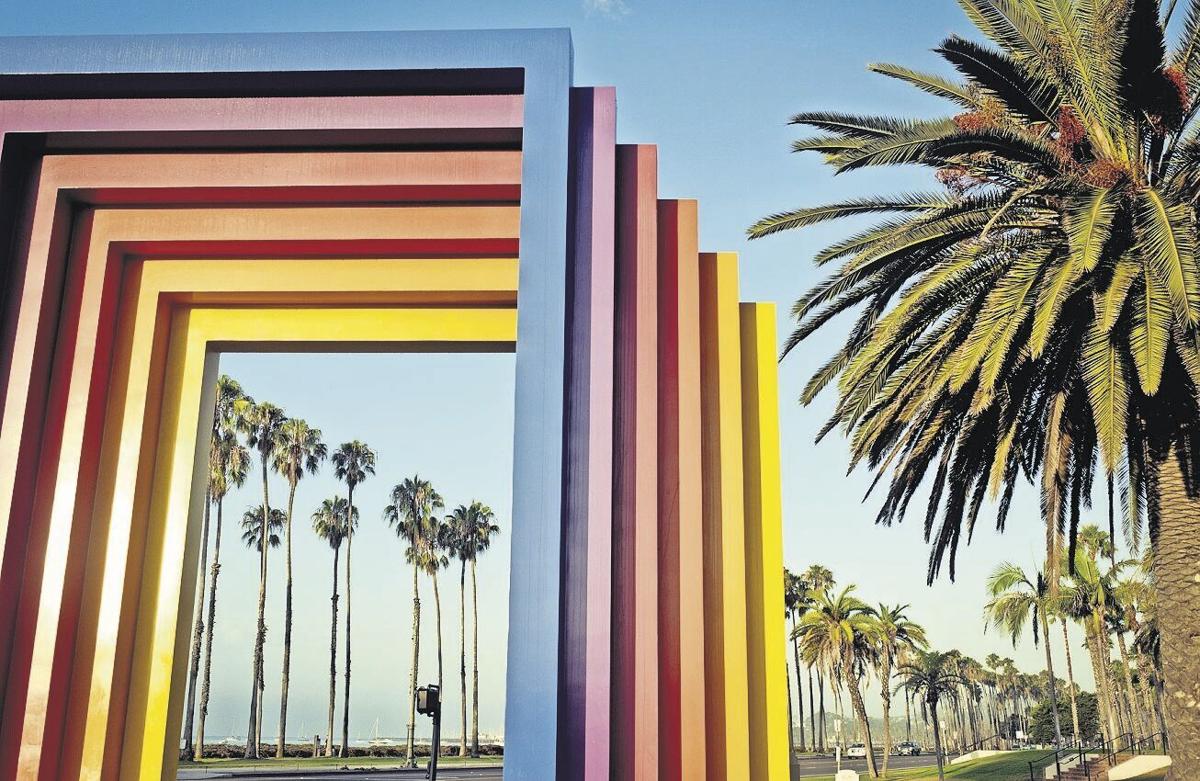 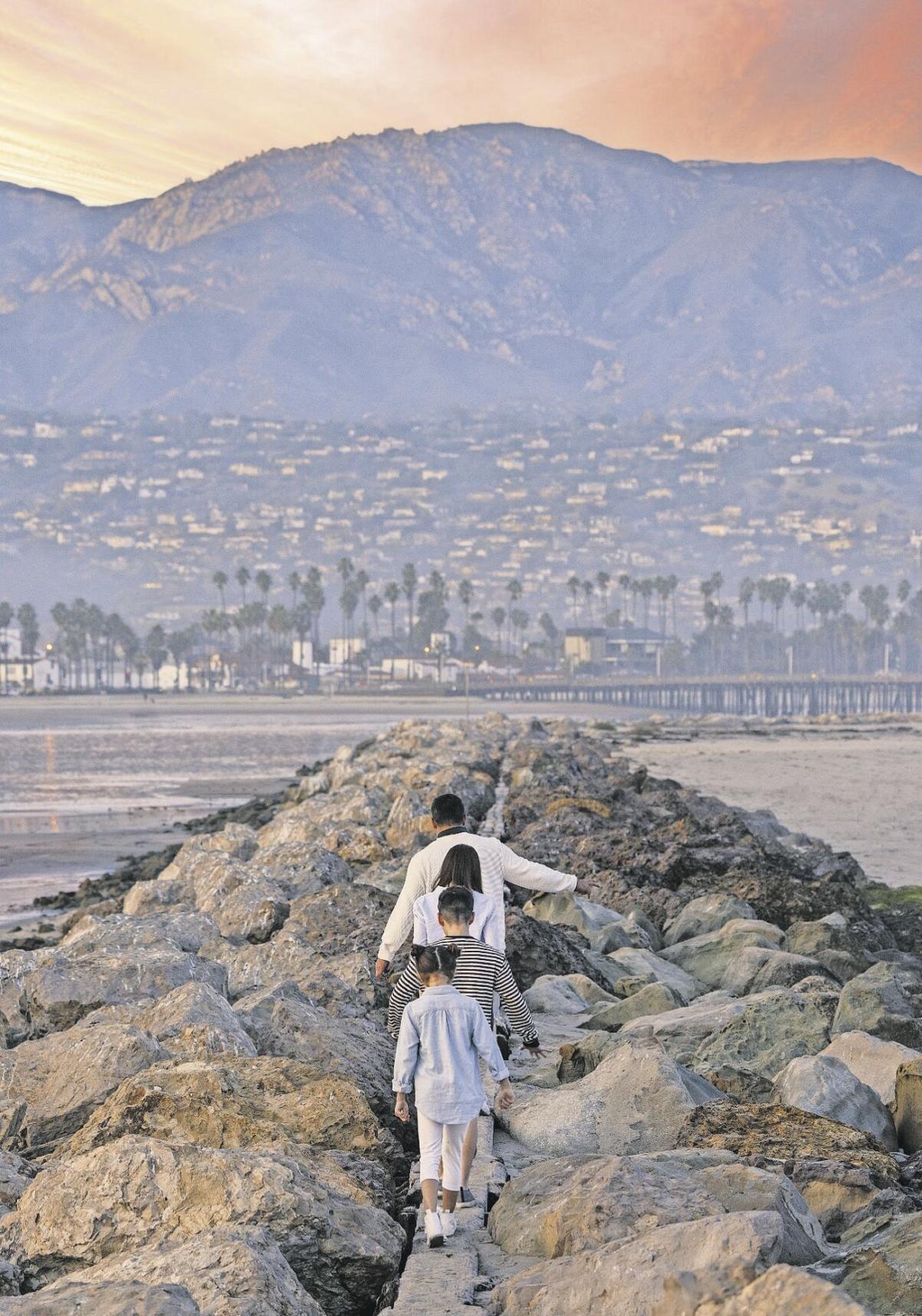 Walking along the rocks at Sandspit Beach in Santa Barbara Harbor.

Santa Barbara, on California’s Central Coast, has been called The American Riviera by travelers for nearly a century. Thanks to its Spanish Colonial Revival style, rich heritage, stunning natural beauty and near perfect weather, this destination has a continental vibe that appeals to Hollywood celebrities and first-time visitors alike.

The city is a self-contained paradise between the mountains and Pacific Ocean. Distinctive architecture and lush landscapes evoke the aesthetic of the European Riviera combined with a carefree California spirit.

Visitors often feel swept away by the nostalgia of faded Hollywood glamour and glitz. That’s because Santa Barbara was the original Hollywood. Hundreds of silent movies and early westerns were filmed here. The region is still used as a backdrop for photo shoots, commercials and feature films such as “Sideways,” “The Graduate” and “20th Century Women.”

A good way to get acquainted is by strolling down the milelong State Street Promenade, a 10-block stretch from Sola to Gutierrez streets. This pedestrian walkway exudes a festive, continental atmosphere with restaurants and bars now expanding outdoors into the streets, sidewalks and curbsides.

Walking along the rocks at Sandspit Beach in Santa Barbara Harbor.

Art and culture abound in Santa Barbara. Local artists contribute to the public art scene, as in the rainbow-colored Chromatic Gate by Bauhaus artist Herbert Bayer. For more than 50 years, the Santa Barbara Arts & Crafts Show has featured original works for sale from 200 artists every Sunday from 10 a.m. until dusk on Cabrillo Boulevard.

To get a sense of the city, Stearns Wharf and the Santa Barbara Harbor are iconic attractions. The wharf is the West Coast’s oldest working wooden wharf and a beloved local landmark. Here, the Santa Barbara Museum of Natural History Sea Center is ideal for families, as is a coastal cruise with Celebration Cruises.

The harbor offers a true slice of the seafaring life. There is a Saturday Fishermen’s Market, and kayaking and paddle boarding are popular seaside activities. A beachside ride along the three-mile Cabrillo Bike Path is a strategic way to see the beaches and Andree Clark Bird Refuge.

Santa Barbara County is a diverse wine-growing region. Taking the Urban Wine Trail is a practical way to visit many of the family-run wineries in the walkable downtown area. The unusual mountain-to-ocean terrain and variety of micro-climates are ideal for growing more than 80 varieties. Santa Barbara is especially known for its Chardonnay, Pinot noir and Syrah.

And then there is Montecito. No other town does low-key luxury or a chic vibe like Montecito, five minutes away. This small community harbors many celebrities such as Oprah Winfrey and Rob Lowe, and now royalty with Prince Harry and Meghan Markle, the Duke and Duchess of Sussex.

Architectural walks are a convenient way to experience the city’s beauty and vintage charm. Winding cobblestone paseos and sidewalks were made for wandering. The self-guided Red Tile Walking Tour provides a well-curated overview of the distinctive Spanish-style architecture. More than a dozen stops showcase adobe structures and the stunning courthouse where now-U.S. Vice President Kamala Harris was married in 2014.

With a year-round growing season, the area’s culinary scene is a taste adventure. The city has half a dozen certified farmers markets where visitors can meet purveyors and savor regional delicacies. When cooking pioneer Julia Child retired to Montecito, the Saturday market was her regular stop. Visit Child’s favorite local haunts using the self-guided map found at sbce.events/julia-child-map.

For newcomers, a citywide tour is recommended. The Santa Barbara Trolley company offers a 90-minute narrated tour of the city. Melissa Hopf is a warm and personable host on her Totally Cali tours. She has extensive knowledge and behind the scenes anecdotes of personalities and places.

For information and a visitors’ guide, contact tourism@santabarbaraCA.com or call 800-676-1266.

Top-tier getaway ideas in the Carolinas

Summer is unofficially here, and many Americans are ready to get back to flying, driving cro…

ASK AMY: Mom would like to be offered a cup of joe

Indian pilots fight for compensation after colleagues die of Covid-19

Indian pilots fight for compensation after colleagues die of Covid-19