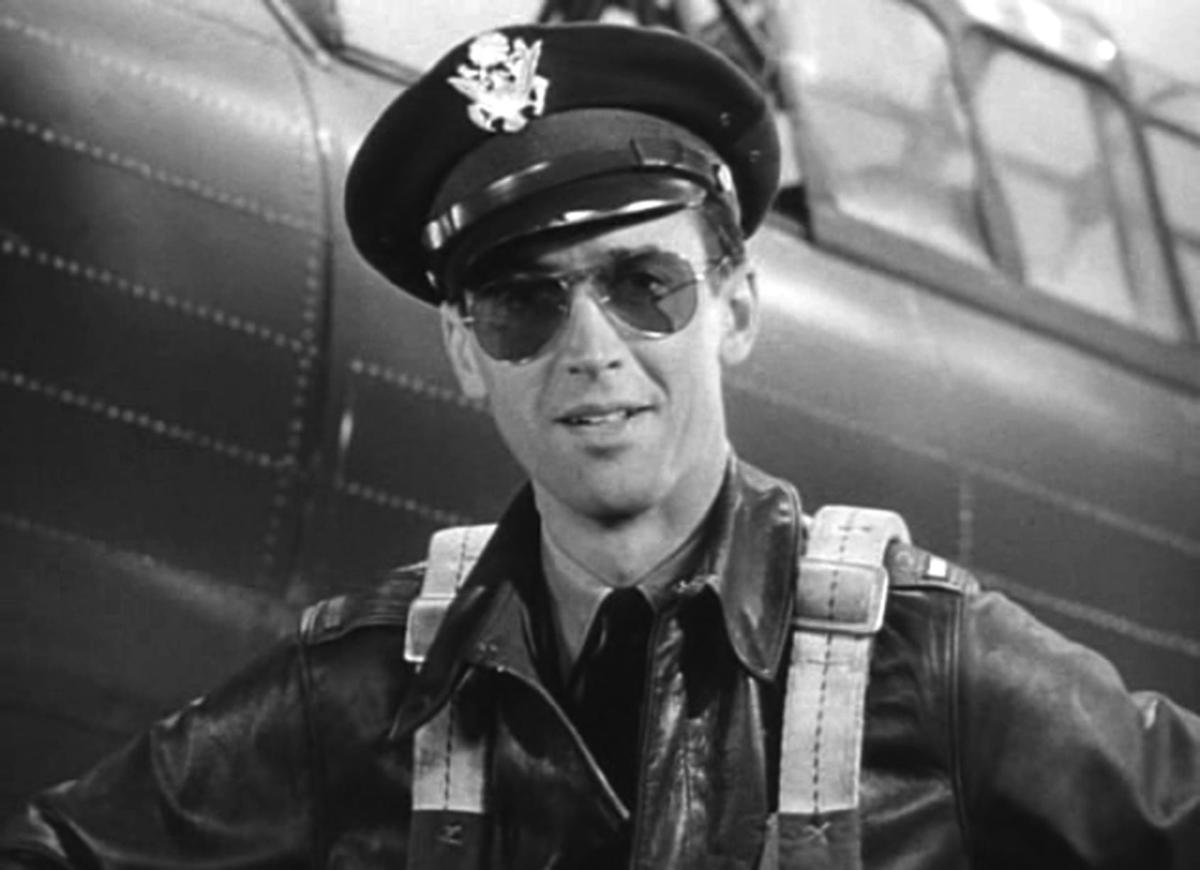 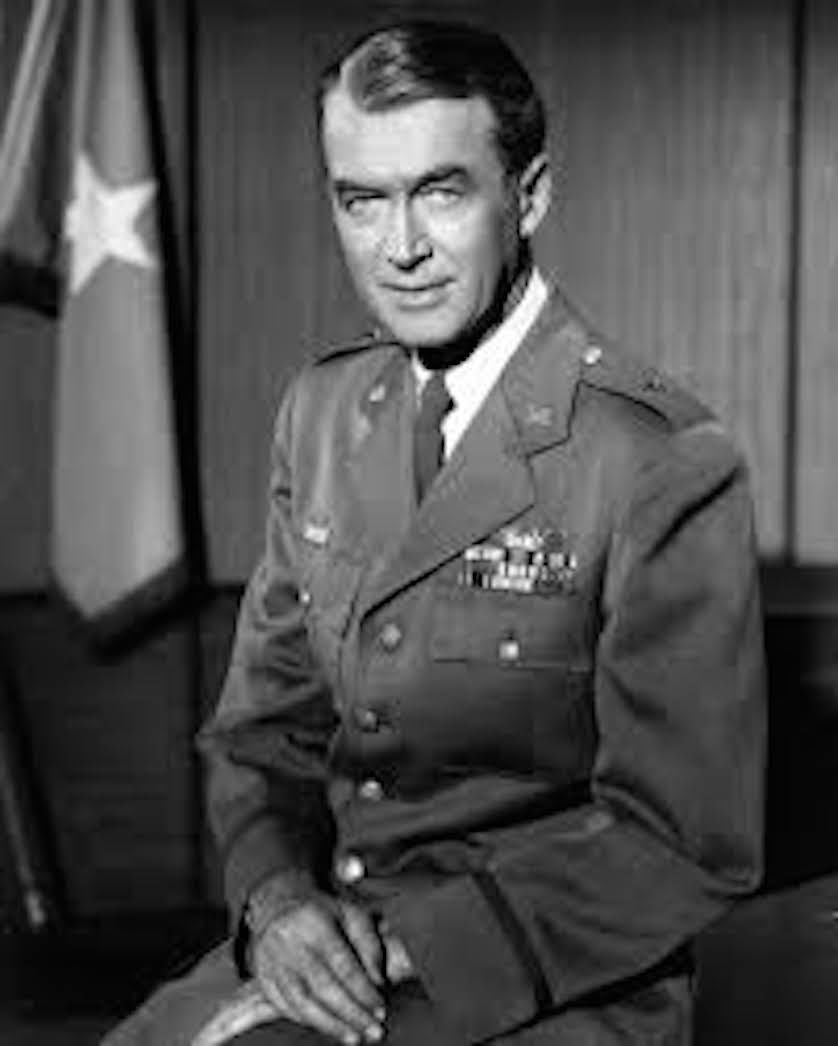 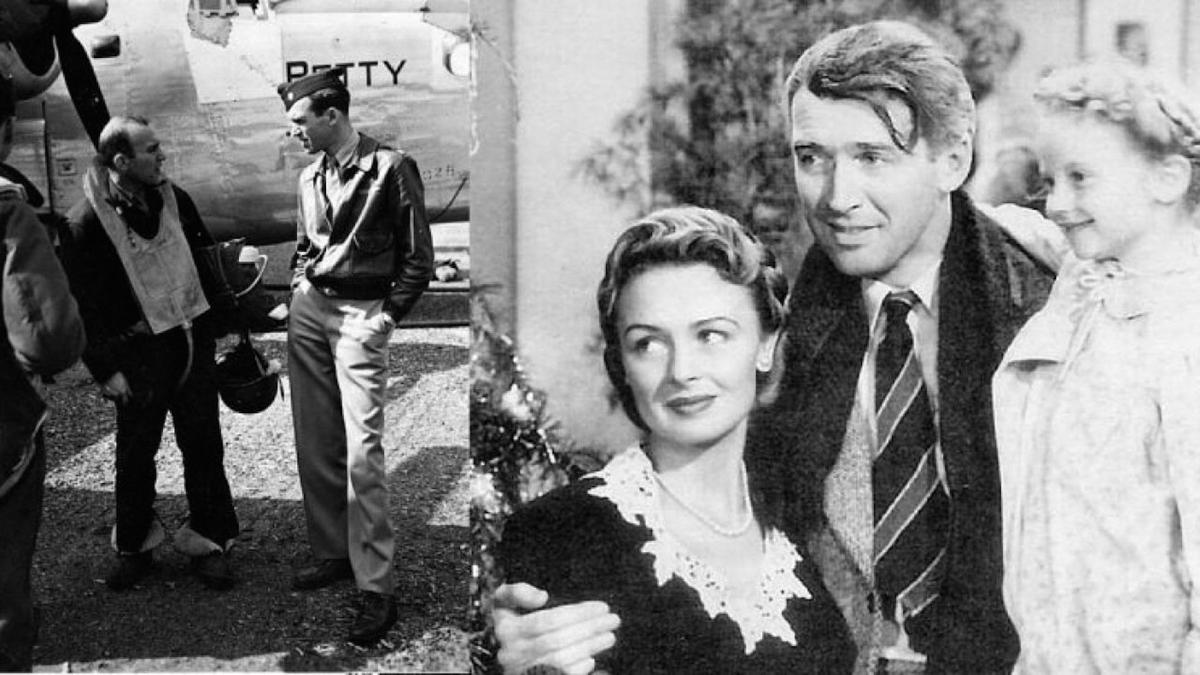 Jimmy Stewart during filming of "It's a Wonderful Life." 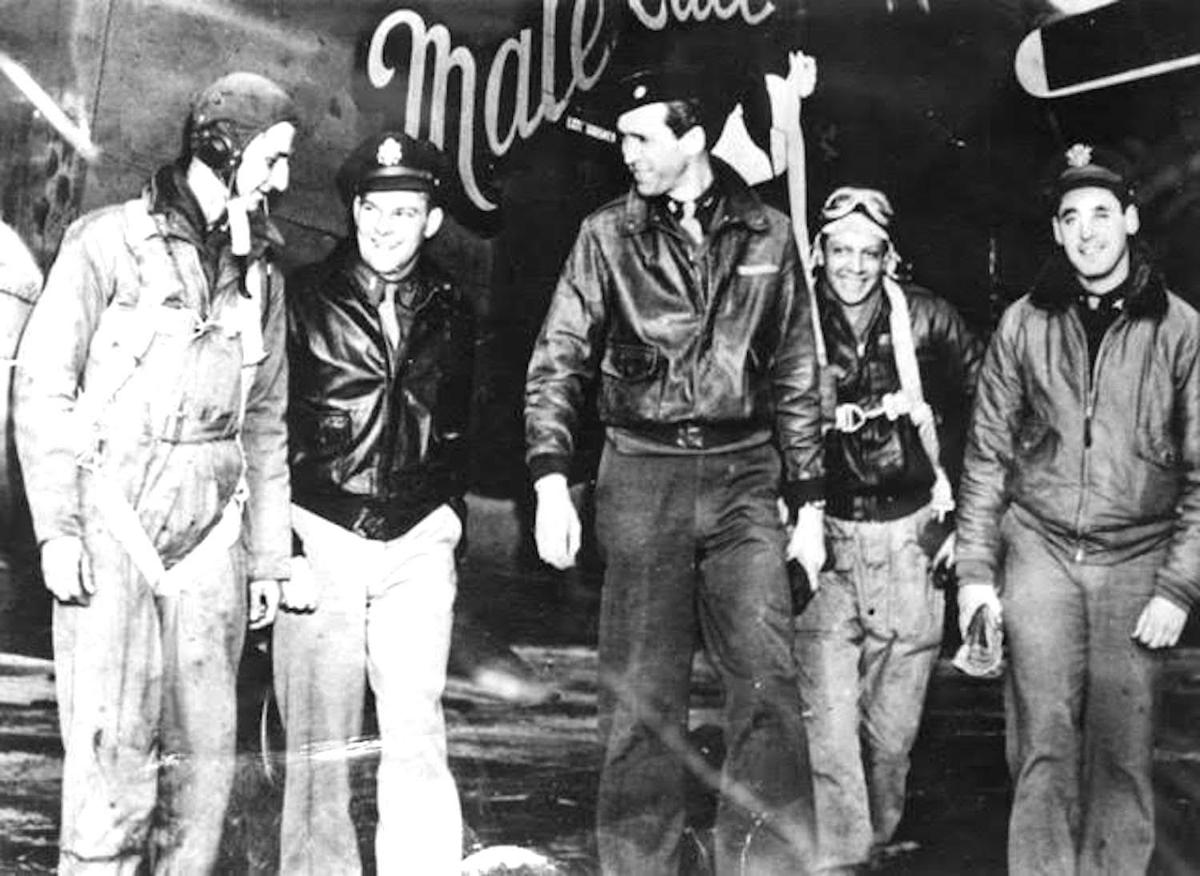 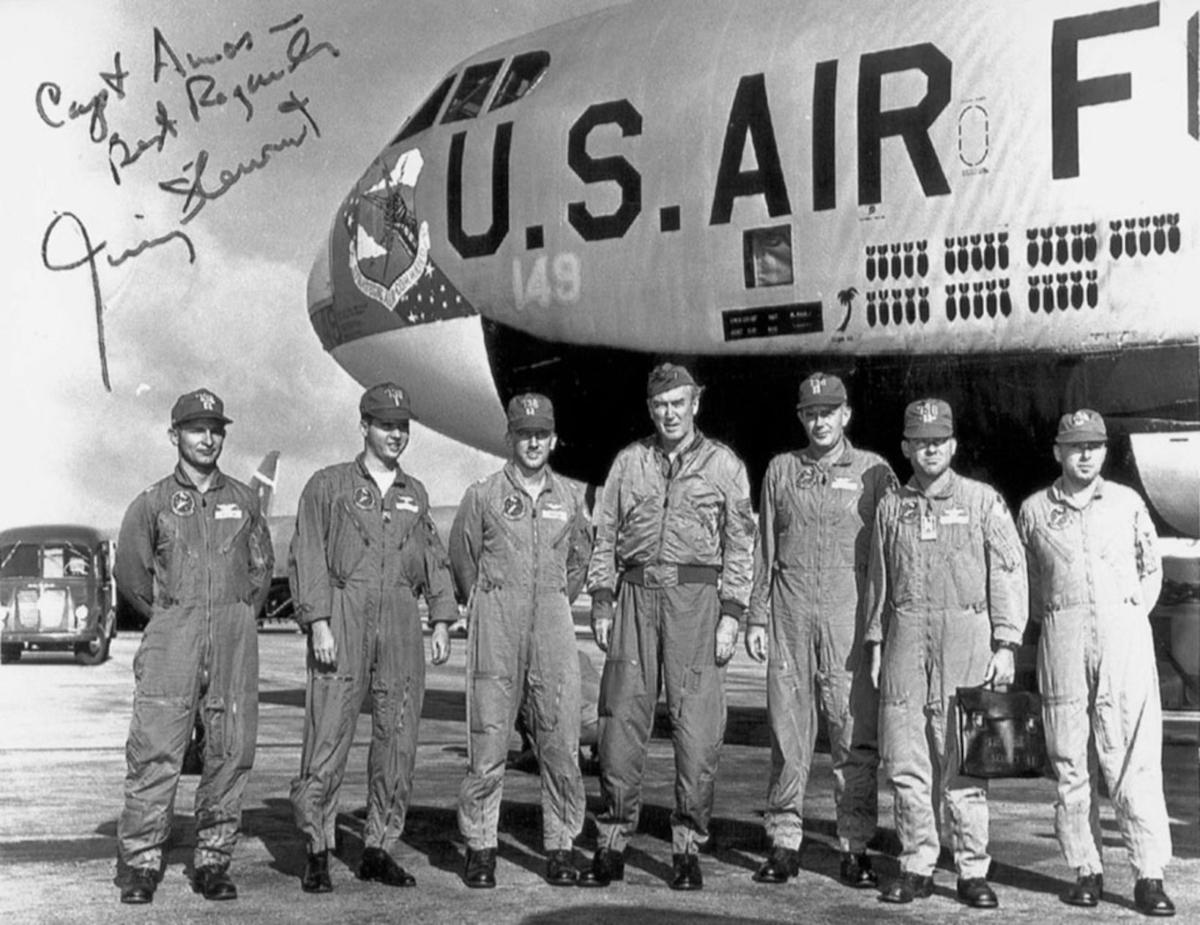 Jimmy Stewart and a B-52 crew during a combat mission to Vietnam. 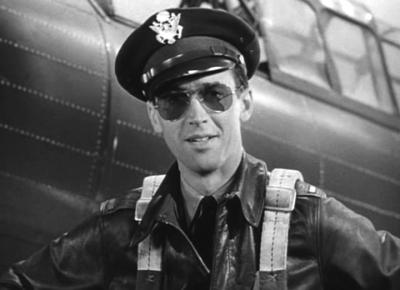 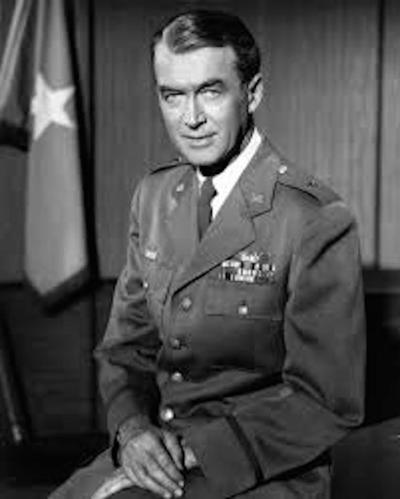 Jimmy Stewart during filming of "It's a Wonderful Life."

Jimmy Stewart and a B-52 crew during a combat mission to Vietnam.

In Frank Capra’s classic 1946 Christmas movie “It’s a Wonderful Life,” award-winning actor Jimmy Stewart played a small-town man who becomes increasingly frustrated with a run-of-the-mill life and overwhelming financial problems. Seemingly without hope and broken in spirit, his character, George Bailey, stares threateningly at the ice-filled river flowing sluggishly beneath the town’s bridge. He is, of course, contemplating suicide.

Suddenly, Angel-Second Class Clarence Odbody, played by actor Henry Travers, diverts the suicidal George Bailey from his own woes and plunges into the icy water, only to be “saved” by good old George. The rest, as they say, is cinematic history. But it’s not the whole story.

When Frank Capra attempted to cast Jimmy Stewart in the lead role, Stewart and his agent, Lew Wasserman, sat down with the filmmaker to hash out the details. As Capra relates the details of Stewart’s role, he remarks that only Stewart could play the part about a guy who wants to commit suicide due to Stewart’s combat experiences in World War II. Stewart reportedly said, “Well, wait just a minute here. That’s not what I want to do.” The meeting went downhill from that point. Stewart got up and walked out. Capra, a war veteran in the Pacific, finally persuaded the famous actor to take the part.

Stewart most likely took the part because a new breed of actors like Marlon Brando and James Dean was coming on the scene and Stewart’s generation of performers, especially the men of Hollywood who donned a uniform for the duration of the war, were competing against youthful faces versus older experience.

Plus Stewart was suffering from what is now identified as PTSD. Next time you watch “It’s A Wonderful Life,” look a bit closer at Stewart’s performance. The rage, frustration, and his wild-eyed scenes were what Capra, Stewart, and several of the film crew were feeling after serving on the battlefields, in the air, and on the oceans during the war. Donna Reed, who played Stewart’s wife in the film, said of the filming, “It was not a happy set. The guys were very tense. They would go off by themselves and huddle, ‘Should we do this? Should we do that?’ That’s how it went for months.”

While making “It’s A Wonderful Life,” Stewart even questioned the superficiality of acting and Hollywood in general. In reply, Lionel Barrymore, who played the double-dealing and penny-pinching Mr. Potter, said to Stewart, “So, are you saying it’s more worthwhile to drop bombs on people than to entertain them?” Needless to say, that set off a hot-blooded round of fireworks.

Jimmy Stewart, however, was as many of his roles projected, a talented but ordinary type of individual, and without a doubt, patriotic and brave. This is his war story.

His acting career before Pearl Harbor was critically acclaimed and critically damned, depending on the movie, his role, and which critic was criticizing. Addicted to aviation from an early age, Stewart earned his private pilot’s license and commercial license before World War II. With war clouds gathering on the horizon, Stewart was the first major movie star to enlist in February of 1941 and reported for induction as a private. He had tried to enlist in November of 1940 but was rejected for being “underweight.” He gained weight by eating spaghetti at least twice a day augmented with steaks and milkshakes. At 32 years of age, he was also over the age limit for aviation cadet training, but beat the rules by applying for a commission as a college graduate (Princeton) and a licensed commercial pilot. By war’s end, Stewart was one of the few men who began as a private and finished the war as a colonel.

But flyboy Stewart did not receive the “role” he wanted to play in the Army Air Corps. The Army wanted to capitalize on his fame by narrating training films, radio appearances and war bond tours. Having his salary as an actor drop from $12,000 per week to $21 per month as a G.I. gave Stewart all the incentive he needed to rock the boat. He got his wish.

Flight instructor on AT-9s in California, bombardier and four-engine training in New Mexico and Utah. Eventually sent to Boise, Idaho, with the 29th Bombardment Group, he became an instructor on B-17 Flying Fortresses. He lost his roommate in one accident and three students in other mishaps. Stewart was one of the few training officers who remained in the field control tower until all his planes had returned.

On one night mission, Stewart left the co-pilot’s seat to check on some equipment as the student pilot continued the flight. A new navigator took Stewart’s co-pilot seat. One of the engines suddenly exploded. The flying shrapnel knocked the student pilot unconscious and the new navigator froze at the controls. Stewart returned to the cockpit, removed the navigator from the co-pilot’s seat, extinguished the fire, and landed the B-17 safely on three engines.

Men like Stewart were needed in England. On Nov. 11, 1943, Capt. Jimmy Stewart led 24 B-24 bombers to Jolly Old England by way of Florida, Brazil, Senegal and Morocco. They were assigned to the 2nd Air Division, 8th Air Force, stationed at Tibenham. After a few orientation flights, Stewart made his first mission to bomb the Naval yards at Kiel in a B-24 named Nine Yanks and a Jerk.

On his third mission, 35 B-24s hit V-1 rocket launching sites in France. Except for two B-24s that collided during takeoff, all the bombers returned without a scratch.

Stewart took care of his men. One crew stole a keg of beer and hid the booze in the barracks. Stewart walked in, tossed off the covers, drew himself a glass, announced that a keg of beer had been stolen and it was a very serious matter. The keg was to be returned … if ever found. Stewart finished his beer and walked out. Another time a paymaster said he didn’t have the money to pay Stewart’s crew on time. Stewart advised the paymaster to “find” the money or be transferred to the infantry. Stewart’s crew was paid on time.

Returning from a bombing mission over Ludwigshafen, Stewart noticed the lead group in his flight was off course and headed over enemy airbases in Northern France. He radioed the lead plane … the flight leader replied, “No, we’re not off course and stay off the radio!” Stewart could stay with the main formation for better protection, or stay with his flight leader to offer them better protection. He chose to stay with his leader. Soon, the sky was filled with 60 German fighters. The flight leader went down in flames, as did seven other B-24s in the lead group. All of Stewart’s planes returned safely.

On Feb. 25, Stewart’s group flew a nine-hour mission over Furth. Some of the lead B-24s dropped chaff to confuse enemy radar. It didn’t work. The chaff actually drew radar-controlled anti-aircraft fire at the lead planes. A direct hit exploded right behind the nose wheel of Stewart’s B-24 but the Liberator kept on flying and somehow made it back to base. Once Stewart had the bomber on the ground, the plane buckled and cracked like an egg. The uninjured crew exited the “cracked egg” and took a long look at their destroyed aircraft. Stewart told the ground crew sergeant, “Sergeant, a fellow could get killed in one of those things.”

Known for his humor, his down-to-earth personality, his ability to lead and care for his men, Jimmy Stewart became one of the most admired and respected flyboys of the 8th Air Force. But war is a nasty business, even for Hollywood stars. He’d seen bombers blown out of the sky, with many of his friends; he’d seen friends fall out of the bombers, without parachutes. He said of war, “Fear is an insidious thing. It can warp judgement, freeze reflexes, breed mistakes. And worse, it’s contagious. I felt my own fear and knew that if it wasn’t checked, it would infect my crew members.”

In April of 1945, Jimmy Stewart was promoted to colonel and made chief of staff of the 2nd Air Division. It was during this time, while waiting daily for his aircrews to return, that his hair started turning gray.

To research Jimmy Stewart’s war experiences tells the story of humor and tragedy, of humanity and the price of freedom. He returned to the states a hero, if “hero” is the right word to use. Jimmy Stewart was pale and sickly, and sick at heart. He’d lost weight he couldn’t afford to lose. He’d lost friends he’d never forget. He became withdrawn, even for a timid man like Stewart. He’d seen too much, he’d changed, and was wondering if he could carry on.

His movie career did rebound, and “It’s a Wonderful Life” was part of that recovery. Later in life Stewart was asked about his thoughts on World War II. He replied, “It’s something I think about every day. It was one of the greatest experiences of my life.” When asked if it was greater than his movie career, Brigadier General Jimmy Stewart replied, “Much greater.”

Jimmy Stewart flew one more combat mission. In 1966, he flew on a B-52 bomber as an observer over North Vietnam. A year later, his stepson, Ronald McLean, was killed in South Vietnam.

For those of us who make it home from a war, we are changed. The beast called war changes everyone. You cannot escape nor avoid the memories nor the nightmares. But, we are alive, and yes, “It’s a Wonderful Life.”

Hope you had a Merry Christmas, everyone, and have a safe New Year.

The country is paying tribute to NBA legend Kobe Bryant

Young athletes, a baseball coach and mothers. What we know about the others on board the helicopter crash that killed Kobe Bryant

John Bolton's memoir, 'The Room Where It Happened,' gets March 17 release date