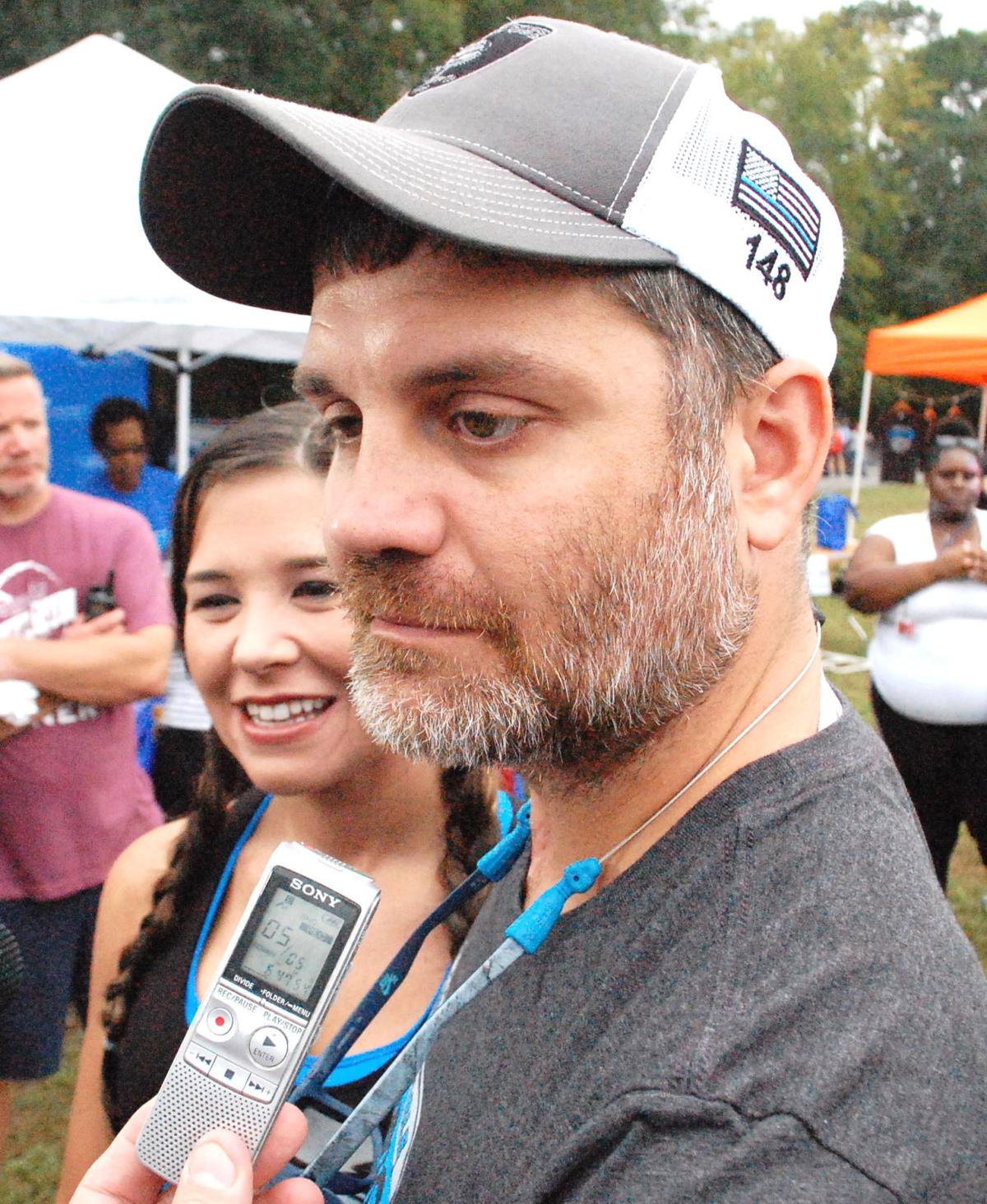 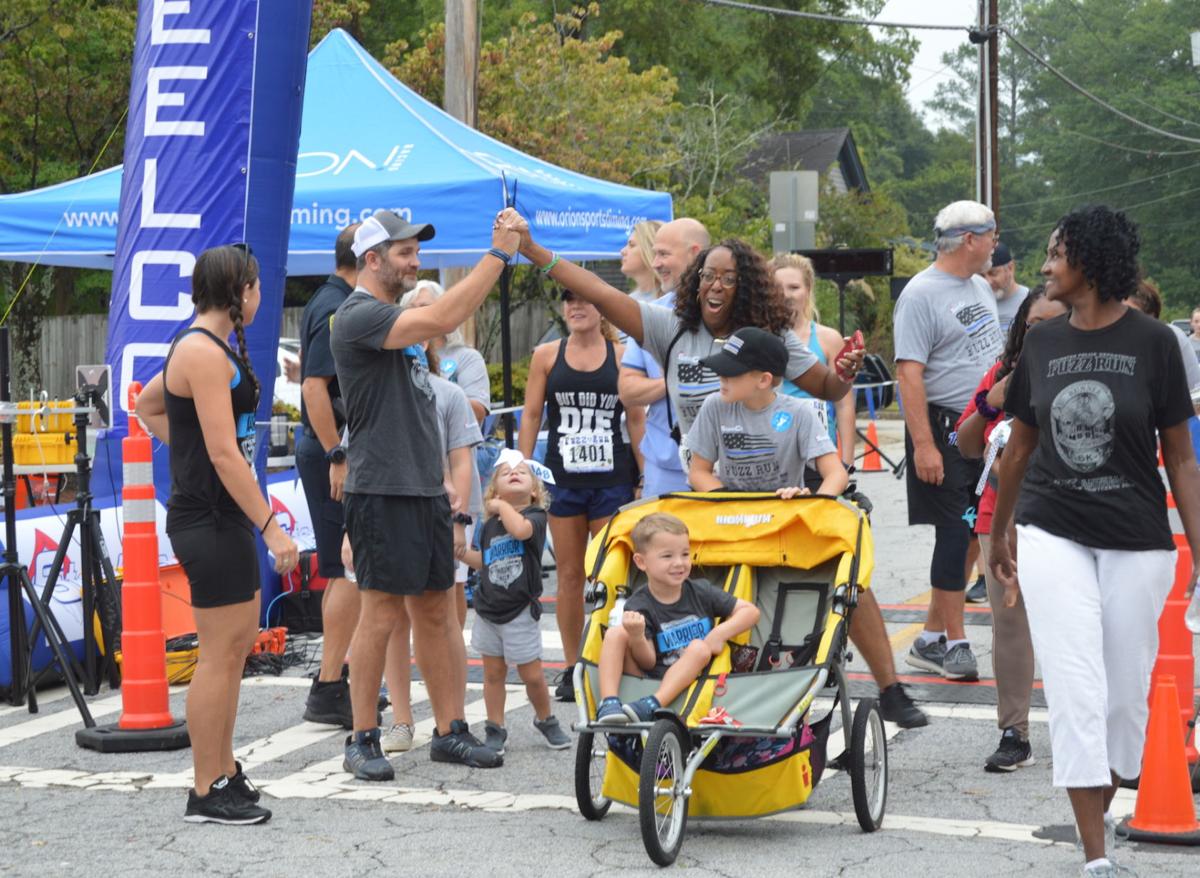 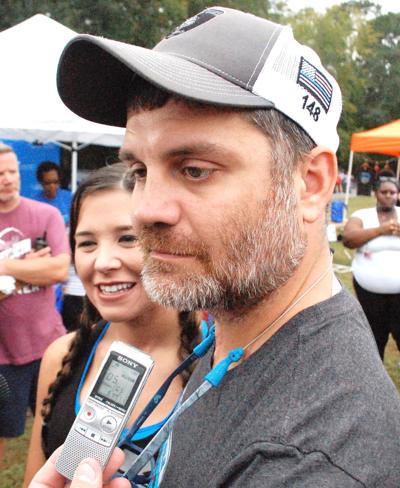 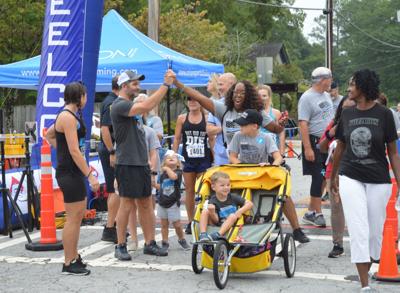 COVINGTON — Covington Police Officer Matt Cooper, critically injured in a line of duty shooting last September, continues to be an inspiration to his supporters during his recovery and took it a step further Saturday by running in the 1-mile fun run during the 36th annual Fuzz Run.

Cooper said after the race it felt good to be able to take part this year.

“When I woke up (in the hospital after the shooting), the race (last year) had already happened. I was so mad I missed it,” he said. “I said I was doing it this year. My main goals were to get my feeding tube out, my skull put back on, and run the Fuzz Run this year.

“All I could do was walk it this year, because they’ve got to find the fine line between being physically active again and being a parent again, because if I wear myself out, I can’t be there for my family, and they mean the most to me.

“To be able to finish with a quick jog for at least 10 feet meant the world to me,” he added. “And to have everybody cheer me on; I’m beyond humbled by this city.

“Crossing the finish line and throwing my hat in the air was like graduating to me. It was a big goal.”

Many of the runners and spectators at the race Saturday called Cooper an inspiration. When asked what he thought about that, Cooper said, “To be able to inspire people inspires me. I hold myself to a higher standard so I can inspire them to be better versions of themselves. There are hard times for me, but I can’t let my negative personality bring them down. As long as I’m a beacon of hope to somebody, I’ll keep doing what I’m doing.”

Kristen Cooper, his wife, said she and her family are feeling very thankful.

“This time last year, if you would have told me this is where we were, I would never have believed you,” she said. “Even the doctors wouldn’t have believed you. I’m just really thankful. God has definitely — despite a bad situation — blessed us.

“He’s worked so hard. It is just a good milestone. When he crossed the finish line, our son said ‘My daddy won!’ I said yes, he won. We’re just really thankful.”

Kristen Cooper teared up at the start of the fun run as her husband set out. She said the tears came from having seen him work so hard to be able to get to this point in his rehabilitation.

“All of us are working so hard to get some kind of normalcy back or establish a new normal, and I was just really proud of him,” she said. “He had therapists from Shepherd (Center) with us, and it was just a good day. I’m not sad today like I was last year, just really happy. Good tears.”

Cal Thomas: Moderate, centrist: What do these mean?