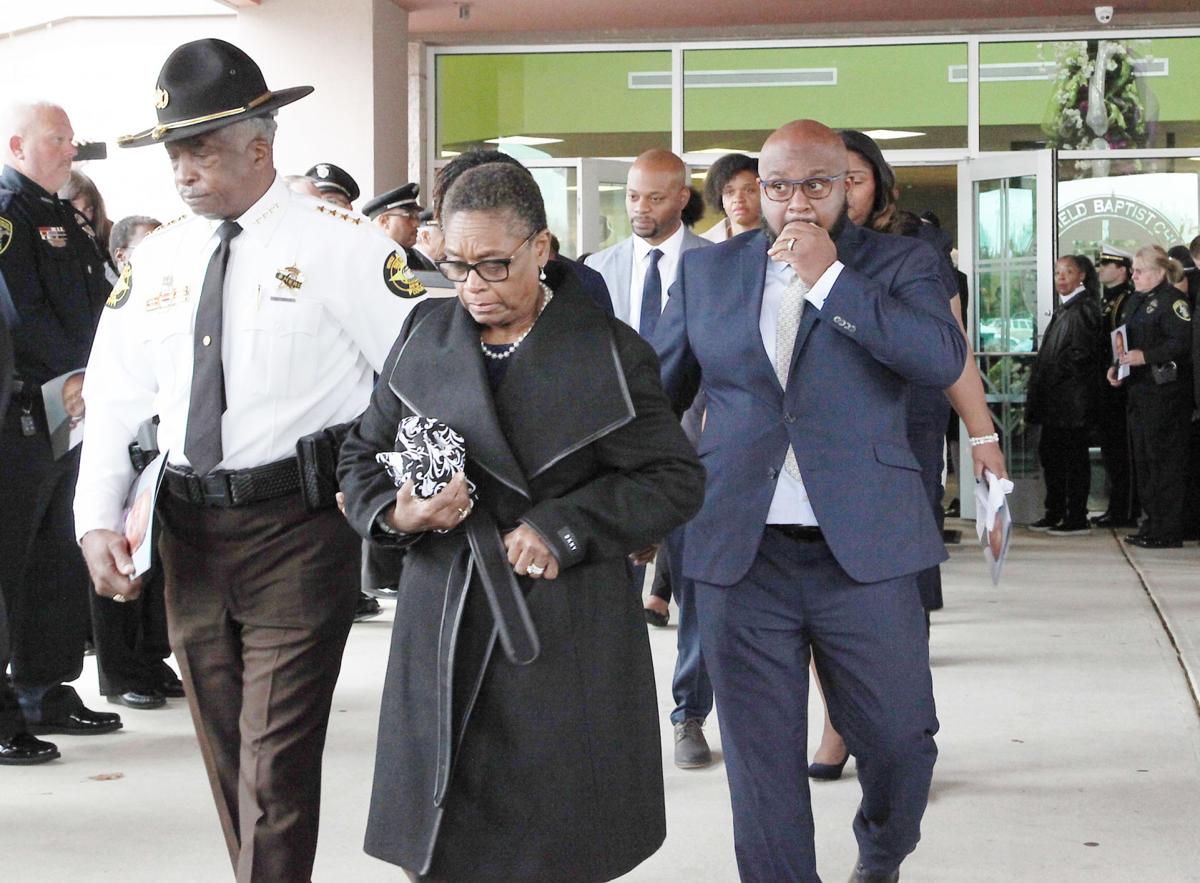 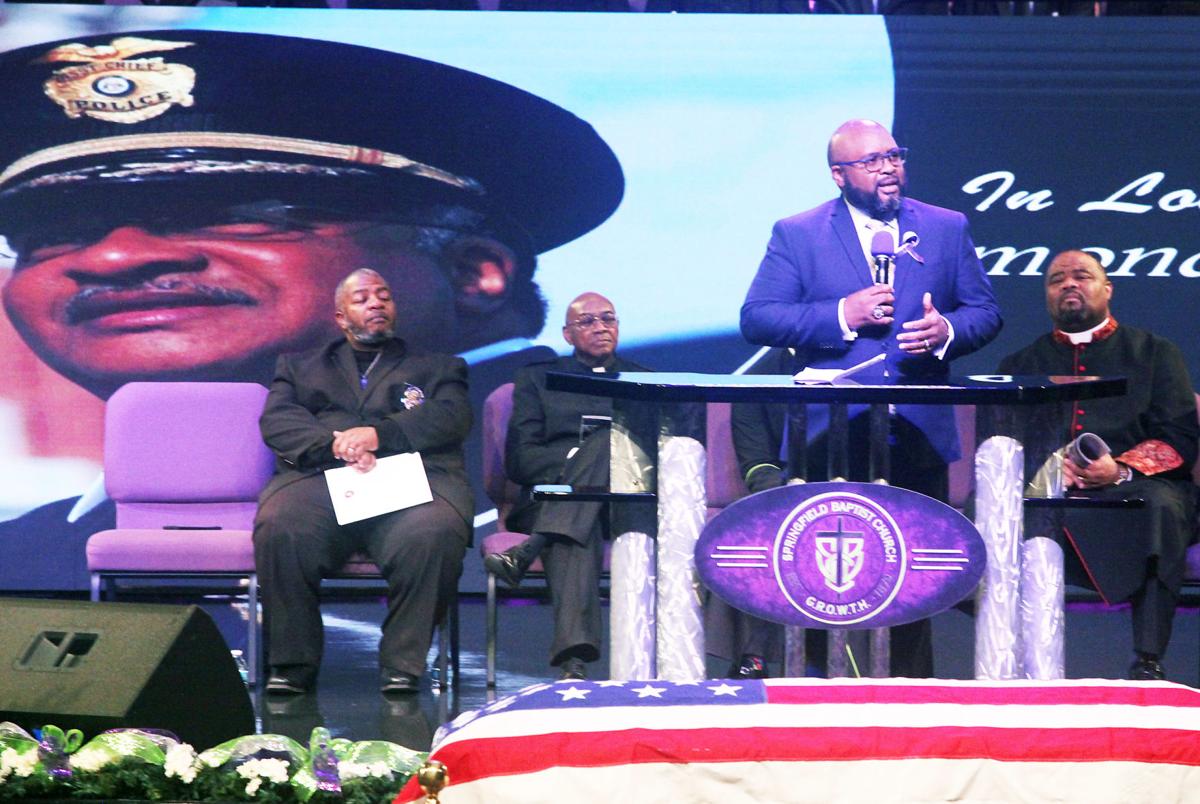 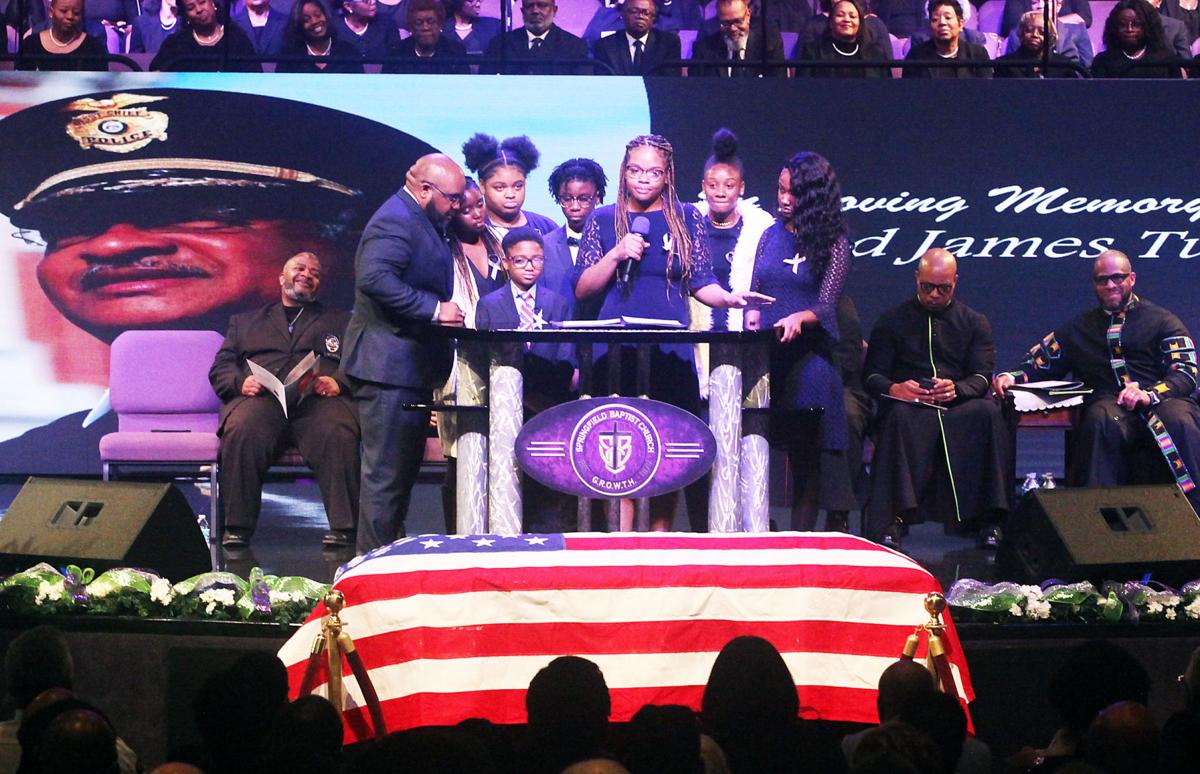 Special PhotosSome of the grandchildren of Almond and Anita Turner speak at their grandfather’s funeral services Monday at Springfield Baptist Church. Standing with them, at left, is Dwahn Turner, eldest child of the Turners. 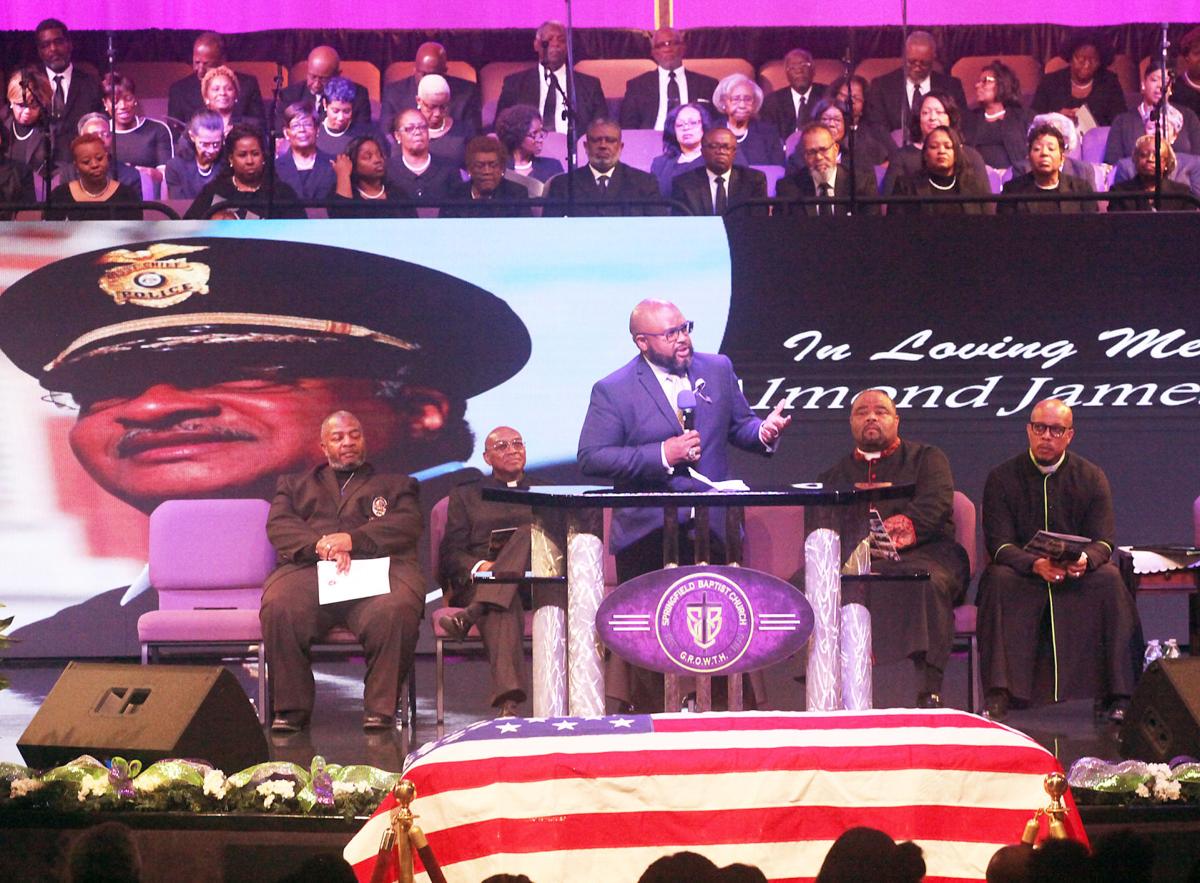 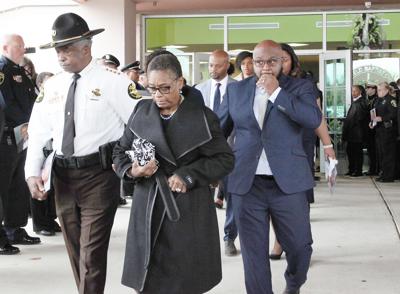 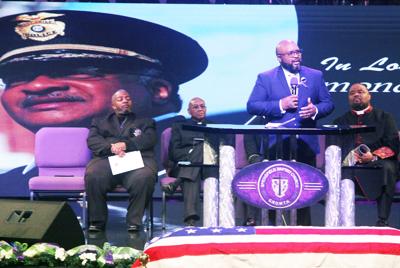 Special PhotosSome of the grandchildren of Almond and Anita Turner speak at their grandfather’s funeral services Monday at Springfield Baptist Church. Standing with them, at left, is Dwahn Turner, eldest child of the Turners.

CONYERS — Thousands of people from near and far streamed into Springfield Baptist Church Monday morning to pay tribute to a man who was remembered as an exemplary husband, father, grandfather, brother, law enforcement officer and community leader.

Elected leaders, government officials, law enforcement officers, church leaders, family and friends celebrated the life of Almond James Turner, who died Nov. 23. Turner was a 23-year member of the Newton County Board of Education and had retired as assistant police chief from the Covington Police Department after 45 years of service.

The Springfield Baptist Choir welcomed mourners into the sanctuary with a spirited chorus of hallelujahs.

Several local leaders spoke during the service. Covington Police Chief Stacey Cotton said his first official act as chief in 1997 was to promote Turner to assistant chief, making him the highest-ranking African-American ever to serve on the force at that time. Cotton recalled Turner’s love of his faith, family, music and good food and said Turner was a great influence on his life as someone who taught by example.

“Almond didn’t thump a Bible; he just lived his life and let us watch,” said Cotton.

The result, said Cotton, is that Turner had a “profound impact on so many lives. We are a better community because of Almond Turner.”

Turner was killed Nov. 23 in Meridian, Miss., while attending a birthday celebration for his wife’s sister. Police say at some point Turner’s nephew, 41-year-old Christopher Denson, retrieved an AK-47 from his vehicle, returned to the celebration and shot Turner.

Newton County Board of Education Chair Shakila Henderson-Baker presented a proclamation to Turner from the school board, recognizing his leadership and his support of public education. Superintendent Samantha Fuhrey presented the Superintendent’s Coin of Distinction to Turner, one of only three people outside the school system to have received that honor.

Fuhrey remembered Turner as a “steady rudder” even during difficult times, particularly during the recession, which was one of the most trying financial periods in recent school system history.

“Mr. Turner was a leader in good times, but he was an even better leader when the times got tough,” she said.

“Mr. Turner was so many things to so many people; he was our school system’s and community’s superman. He was patient and kind, truthful, unselfish, trustworthy, dedicated and forgiving, but at his core Mr. Turner was a teacher. He spent his life teaching everyone who had the great fortune to interact with him…

“He taught us through his words and actions the importance of integrity, patience, kindness, fairness, friendship, love, forgiveness, dedication, care and concern for others, and he capped off all of that with a dose of humor.”

Turner’s eldest son, Dwahn Turner, said he would not comment on the circumstances of his father’s death, but said his father would want him to remind those in attendance “how important God should be in your life,” to think of salvation and to remember how important family is.

“Never get too busy for family,” said Dwahn. “Love them like there is no tomorrow. Support them no matter the sacrifice of your time or your resources. Visit them often and call them even more.”

He also said his father would also remind everyone that they have an obligation to their community.

“What makes a community great is when good people like yourselves and my dad get involved,” he said.

In presenting the eulogy, the Rev. Dr. Eric Lee Sr., senior pastor at Springfield Baptist, said the community must come to terms with the absence of Turner from the daily lives of his family and friends and with anger about the attack that led to his death.

In the face of that, Lee said the congregation of Springfield Baptist and those in the community who loved Turner will remain resilient, because they believe in the God of resurrection.

Atlanta Braves 2020 Chop Fest: What To Know About Saturday's Event