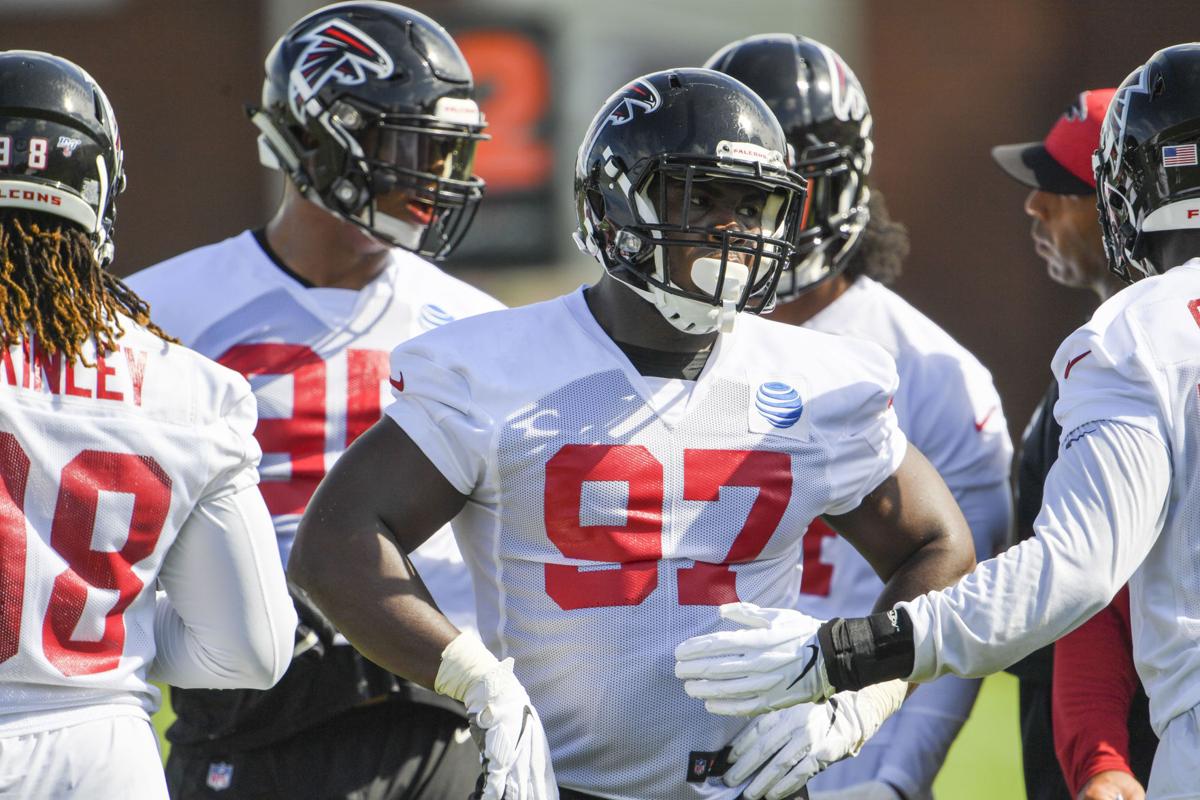 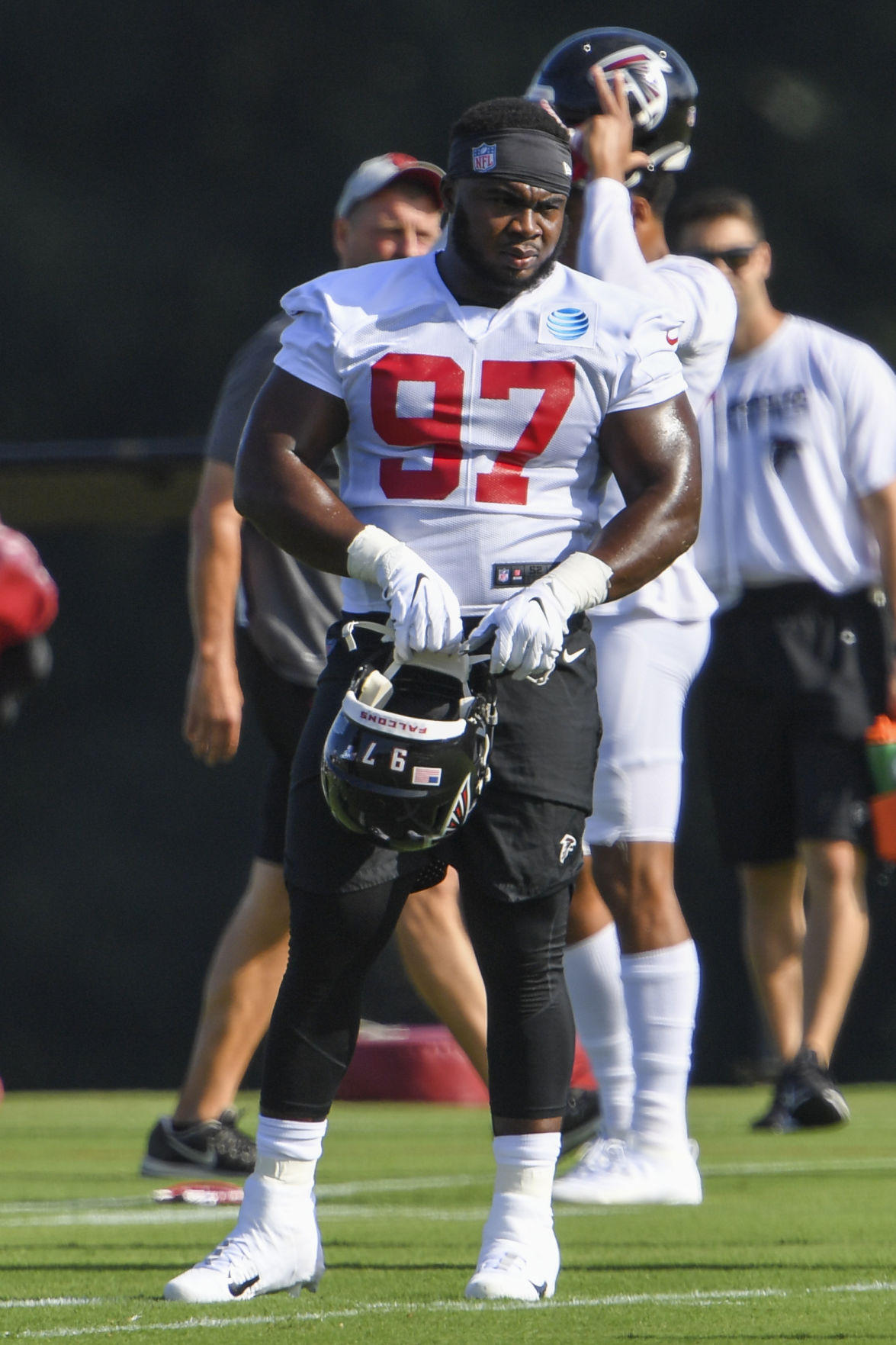 Falcons defensive tackle and Conyers native Grady Jarrett is shown on the field during the first day of the team’s training camp in Flowery Branch. 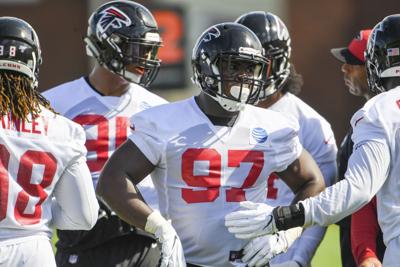 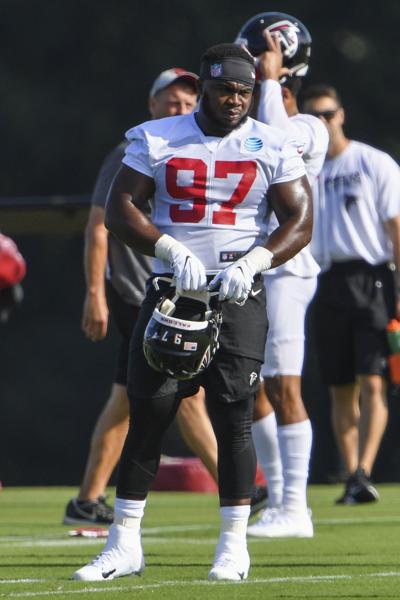 Falcons defensive tackle and Conyers native Grady Jarrett is shown on the field during the first day of the team’s training camp in Flowery Branch.

FLOWERY BRANCH — As the hours wound down last Monday afternoon, Grady Jarrett, along with the Atlanta Falcons brass, were working diligently on a new contract for the Conyers native, unbeknownst to the public.

With many close to the situation well informed on Monday’s 4 p.m. deadline, one based on whether or not Jarrett, who previously signed the team’s one and only franchise tag worth $15.2 million back in April, doubts began to creep in not knowing whether or not the two sides could strike a long-term deal in time.

With just over an hour to spare, Jarrett signed a four-year contract worth $68 million, keeping the Rockdale County alum with the Falcons through the 2022 season.

It was later announced Jarrett would receive $42.5 in guarantees, making him the third-highest paid interior defensive lineman in the NFL.

One week removed from his contract extension, Jarrett took the podium at the conclusion of Day 1 of the Falcons’ 2019 Training Camp at their Flowery Branch facilities late Monday morning excited to get back to work.

“I knew everything would play itself out either way it went,” Jarrett said. “Fortunately, we were able to get something done. I’m happy about it and feel like both sides are happy about it. We’re all just ready to get back to work.”

In a brief statement to NFL Network’s Tiffany Blackmon, Jarrett chalked up their agreement just before the deadline to being, “perfect timing.”

“It went all the way down to it, but it was definitely a good feeling to have the business out of the way,” Jarrett said. “Now I can focus on playing football and giving it all that I’ve got. I was going to do that regardless.”

Jarrett signed his franchise tag in the weeks that followed and was set to play out the 2019 season before entering free agency as a soon-to-be 27-year old next spring.

However, with a new contract in hand, Jarrett said his motivation to perform at a high level has only increased.

I’ve put in a lot of work and have come a long way… it motivates me to continue to do better. Not even live up to a certain standard, but seeing how far I can take it.”

Jarrett enters training camp for the fifth time as a member of the Falcons after his fifth-round selection in the 2015 NFL Draft.

A once three-star recruit out of Rockdale County, later turned Clemson first team All-ACC recipient, Falcons head coach Dan Quinn, who drafted Jarrett in his first season at the helm, said he knew what quality of player he was getting from the first time they met.

“I had a sense that he would become a leader,” Quinn said. “He had that from the time that I met him up at Clemson at the school workout. When he came to our local workout, the same things took place.”

In Jarrett’s first four seasons with the Falcons, he quickly made a name for himself as a standout interior defensive lineman and reached his peak in Super Bowl LI, where he tied an NFL record with three sacks.

After taking over as a starter in his second professional season with the Falcons in 2016, Jarrett has compiled 179 tackles and 13 sacks while generating 143 total pressures, per Pro Football Focus.

Entering Year 5 in what Jarrett referred to as, “the best shape of my life,” high expectations have been placed on himself for the upcoming season and beyond.

“As my career progresses, I’m always going to try and be in better shape than the year before,” Jarrett said. “I’m at a (place) where I feel like I’ve taken it another step in my game. As the season goes on, I want to continue to make strides. I feel like the best is still out there for me and I’m just trying to put my all out there and see what it gets me.”

Jarrett’s progression throughout his career has turned the head of Quinn, who has worked closely with Jarrett and the defensive lineman over the past five years. With Quinn set to take over as the defensive play caller in 2019, Quinn expects his relationship and the stellar play of Jarrett to increase.

“He made a significant jump from Year 1 to Year 2,” Quinn said. “I sense that will probably happen again because of the work that he puts in. I’m really proud of him. This scenario with him, I know what he stands for as a ball player, but I also know what he stands for as a man. When those two things get aligned in the same spacing, you’ve got something pretty rare.”

Holding coaching positions in the NFL as both a defensive line and defensive coordinator prior to his hiring in Atlanta, Jarrett said the excitement level for Quinn to take over the play calling duties is real.

“Without a doubt,” Jarrett said. “Since I’ve been here, Coach Quinn has always been a defensive line minded guy. So he’s always been really intimate with us and giving us a lot of time. With him being the play caller now, it’s definitely some more of his voice going and commanding certain things. I think it’s exciting. It’s definitely an exciting time. There is a lot of good things out there for sand we can’t wait to really bring it to life.”

With new challenges presenting itself in 2019, Jarrett hopes both he and the team can reach their full potential and manifest a deep playoff run after a disappointing 2018 season.

“As a team, we’re motivated,” Jarrett said. “We want a lot. We know that we’re a good team and we have what it takes to get the job done. We know that it is up to us to put the work in, day in and day out. I feel like it’s going to come down to us holding each other accountable and basically just doing it and not talking about it.”

2 Honolulu police officers were shot and killed when they answered a call for help. Then the house they responded to went up in flames

Let's not project our feelings onto Jennifer Aniston and Brad Pitt